PFAS Regulations and the Market for Mitigation Solutions 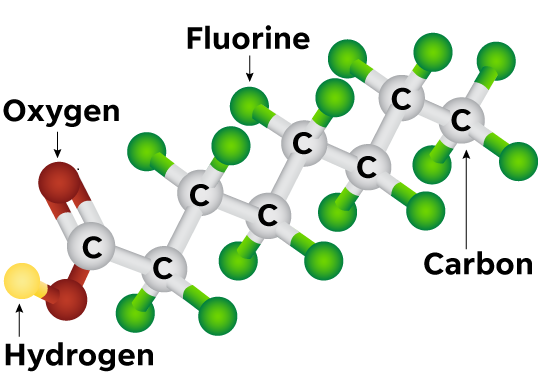 The market for PFAS mitigation and treatment looks poised to grow dramatically in the years ahead, especially for companies that can reduce the chemicals’ presence in both drinking water and wastewater. In this blog, we’ll start to look at PFAS legislation and regulations and the business opportunities they create.

Brief Background on PFAS in the Environment

Per- and polyfluoroalkyl substances (PFAS) are man-made chemicals that first began to be used in the 1940s and eventually became widespread in non-stick cookware, water-repellent clothing, stain-resistant fabrics and carpets, some cosmetics, some firefighting foams, and products that resist grease, water, and oil, such as pizza boxes. Some PFAS, including two of the most prevalent ones, perfluorooctanoic acid (PFOA) and perfluorooctanesulfonic acid (PFOS), are no longer made in the United States, but products containing them can be imported.

PFAS are known as “forever chemicals” because they don’t easily break down. During production and use, they can migrate into the air, soil, and water and accumulate over time. They also can accumulate in humans and animals, where studies have linked them to health problems, leading to regulatory and legal efforts to prevent their further spread and get them cleaned up.

At the federal level, the effort to learn more about PFAS, the health risks they pose, and how to reduce those risks is headed by the Environmental Protection Agency, which devotes a section of its website to the chemicals. The agency unveiled a PFAS Action Plan in 2019 and updated it a year later. In February, the EPA said it plans to regulate PFOA and PFOS, which it had already made the subjects of health advisories saying their combined concentration in drinking water shouldn’t exceed 70 parts per trillion. Other actions taken by the EPA on PFAS this year include re-proposing the Fifth Unregulated Contaminant Monitoring Rule to collect new data on the chemicals in drinking water; establishing a councilon PFAS to formulate a multi-year strategy for dealing with them and boost efforts to mitigate them; and adding treatment options for 11 PFAS to its Drinking Water Treatability Database, bringing the number of PFAS in the database to 37.

PFAS also are drawing attention from Congress. In its March “Legisbrief” headlined “State and Federal Efforts to Address PFAS Contamination,” the National Conference of State Legislatures (NCSL) said Congress introduced more than 80 pieces of legislation relating to PFAS in its 2019-2020 session and included nearly $300 million in the fiscal year 2021 omnibus appropriations bill for the EPA, the Food and Drug Administration and the Defense Department to study, regulate and mitigate them. The House of Representatives on July 21 passed a bill that would require the EPA to establish standards for PFOA and PFOS under the Safe Water Drinking Act and designate them as hazardous substances under the Comprehensive Environmental Response, Compensation, and Liability Act. A group of organizations representing the nation’s municipal governments and water and wastewater systems said in a letter opposing the bill that it could make municipal water and wastewater systems responsible for the cost of cleaning up PFAS they didn’t produce if, for example, PFAS-laden filters used to treat drinking water wind up in a landfill that subsequently becomes a Superfund site. The Senate isn’t likely to pass the bill.

At the state level, action on PFAS is taking off. The NCSL said state legislatures considered more than 100 bills related to PFAS in 2019 and upped that to more than 180 last year. Some of the bills are aimed at cleaning up the chemicals, which, because they were used in the foam for fighting fires caused by flammable liquids, can be found in the soil and groundwater around hundreds of current and former military bases. Others ban the use of PFAS in firefighting foam and/or other products.

States also are moving to regulate PFAS in drinking water. According to law firm Bryan Cave Leighton Paisner, as of January 19, six states had established maximum concentration levels for one or more of the chemicals; eight states were requiring that they be notified when the concentration of one or more PFAS exceeds a specified level; and 10 had issued guidance on safe concentration levels for one or more of the chemicals but were requiring no action when the levels were exceeded. The states that had established maximum concentration levels were Massachusetts, Michigan, New Hampshire, New Jersey, New York, and Vermont; the states requiring notification were Alaska, California, Colorado, Connecticut, Delaware, Maine, New Mexico, and Ohio; and the states that had issued guidance were Minnesota, North Carolina, and Ohio.

Call to Action for Water and Wastewater Industry Business Developers

With today's knowledge about the harmfulness of PFAS chemicals and the knowledge that they are all around us, whether in controlled or uncontrolled quantities in everyday objects , many questions remain unanswered. Luckily, FirmoGraphs is continuously tracking all of the newest updates, legislations and regulations related to PFAS substances.

If you are in this market, as a consulting engineer, construction firm, or provider of treatment materials and equipment, there will be opportunities to help utility and industrial companies for many years to come.  In our next blog(s) in this series we’ll look at the size of addressable markets, considering drinking water, wastewater, and environmental remediation.  Until then, Feel free to request a meeting and review the data we are tracking live in the BI.