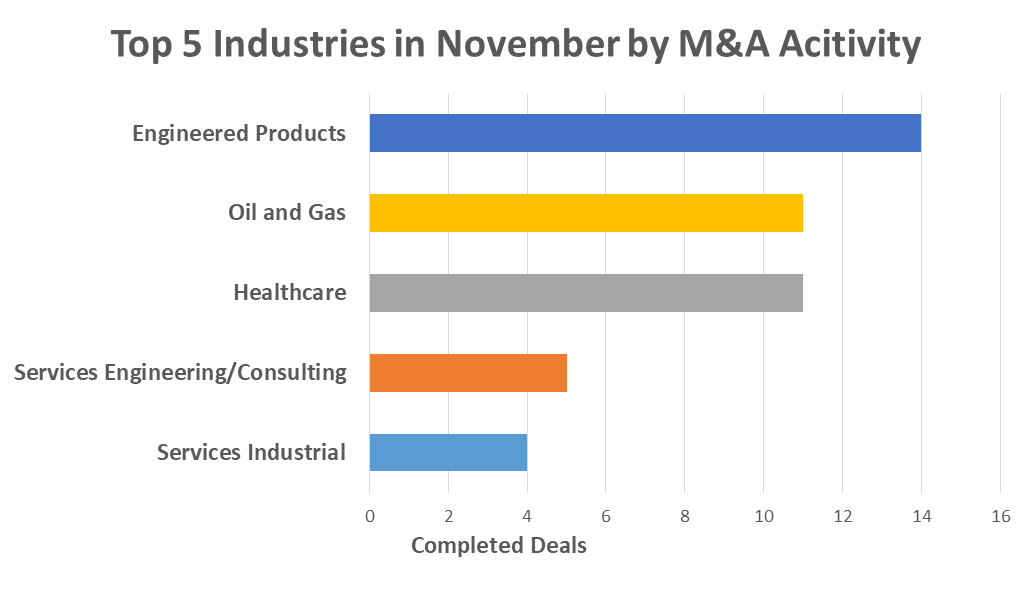 There were six completed M&A deals in the utilities industry, all of them related to renewable power. Although most deals occurred in the electricity sector, the largest deal was completed in the telecommunication segment. Radiate HoldCo acquired Chicago, Evansville, Indiana, and Anne Arundel, Maryland service areas from WOW! for $661 million.

FirmoGraphs recorded 11 completed deals in the oil and gas industry, the highest level this year. Supported by the highest oil prices in the last few years, many deals were completed and announced in November. The largest completed transaction was Chesapeake’s acquisition of Vine Energy in a deal worth $2.2 billion.

With 14 completed transactions, the engineered products industry was the most active in November. The largest deal was RBC Bearings’ acquisition of the DODGE mechanical power transmission division from Asea Brown Boveri for $2.9 billion. Another deal that has to be mentioned is CNH Industrial’s completed acquisition of Raven Industries, valued at $2.1 billion.

In total, 11 transactions were completed in the healthcare industry last month. The largest acquisition was Pfizer’s purchase of Trillium Therapeutics for $2.22 billion.

In other industries, the largest completed deal was the acquisition of Solenis by Platinum Equity in the deal valued at $5.25 billion.

In addition to completed transactions, FirmoGraphs recorded almost 40 announced future deals. Among the announced deals, the most notable are:


FirmoGraphs watches North American industrial news and curates a normalized version of monthly merger and acquisition information. This way, you can leverage the Merger Mart along with others (such as Power, Water) to generate your own unique observations for the US industrial market.