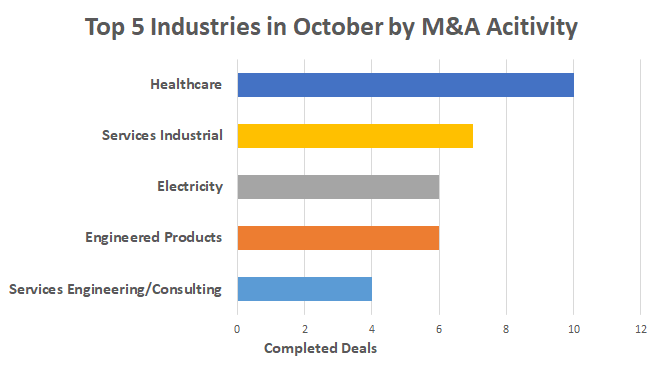 There were six completed M&A deals in the utilities industry, all of them related to renewable power. The largest transaction was SunPower’s acquisition of Blue Raven Solar for $165 million.

FirmoGraphs recorded three completed deals in the oil and gas industry. The largest transaction was the completed merger between Cabot Oil & Gas and Cimarex Energy, valued at $17.0 billion. This was the largest completed transaction in all industries tracked by FirmoGraphs in October.

Six transactions were recorded in the engineered products industry. The largest deal was Pentair’s acquisition of Pleatco for $255 million.

The healthcare industry was the most active one in October, with ten completed transactions. The largest acquisition was Amgen’s purchase of Teneobio for $900 million. However, the deal can rise to $2.5 billion if certain milestones are reached.

Three large deals in other industries stand out:

In addition to completed transactions, FirmoGraphs recorded over 40 announced future deals. Among the announced deals, the most notable are: