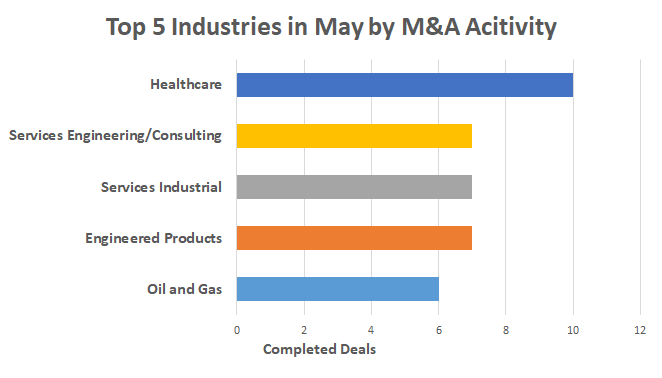 There were seven completed M&A deals in the utilities industry. Cable One’s acquisition of Hargray Communications was the largest one in a deal valued at $2.2 billion. Also, it should be noted that Avangrid Renewables and PNM Resources received another approval for their merger, this time from the Nuclear Regulatory Commission.

Seven transactions were recorded in the engineered products industry. There weren't any large deals. However, AMETEK continued with its numerous acquisitions. AMETEK acquired NSI-MI Technologies for $230 million, which is AMETEK’s fifth completed acquisition in 2021.

The healthcare industry was the most active industry, with ten completed deals, with one standing out...Jazz Pharmaceuticals’ acquisition of GW Pharmaceuticals for $7.2 billion.

One additional transaction of note is a business combination between Lion Electric, a manufacturer of urban electric vehicles, and Northern Genesis Acquisition Corp in a deal worth $1.9 billion.

In addition to completed transactions, FirmoGraphs recorded over 30 announced future deals, including 12 multi-billion transactions. Among the announced deals, the most notable are:

Having a good understanding of customer M&A activities can be key to the health of your business.